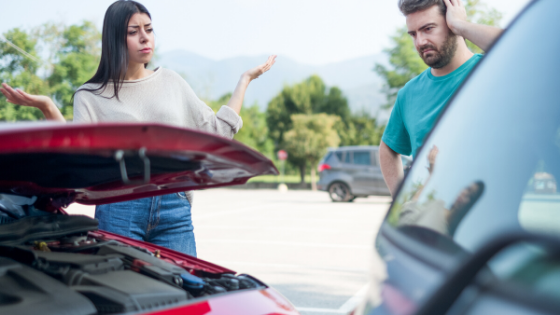 It’s Not An Accident If It Was Someone’s Fault

For those of you who have seen our new billboard (shout out to our models Ramona and Pecher), you have probably seen the phrase “It’s not an accident, if it was someone’s fault.” Why did we choose that phrase?

Because so often at our firm and in our day to day lives, we encounter people who have been in car accidents but don’t bother to follow up with an attorney. Or they go the extra step and file a claim with their insurance company. Or they pay the fines versus going to court to dispute.

We hear, “Well it was just an accident. It happens to everyone.”  Yes, it does happen to everyone. But most of the time, a car accident is due to the negligence or an action by one (or both) of the drivers.

Who Is At Fault?

A common misconception is that if you are at fault in a car accident, you can’t recover damages for your injuries.

This is not necessarily the case. Missouri law uses a Comparative Fault system, which decides how the damages from the crash will be divided among all parties (both the defendant and the plaintiff drivers).

This requires each party to take responsibility for the damages incurred during the accident.

Based on the damage location on the vehicle, accounts taken from eyewitnesses and the crash report, the insurance company could determine that one person was 100% at fault.

However, if this was a multi-vehicle collision or there was negligence from both drivers, the fault could be split accordingly amongst all the parties.

For example, let’s say both drivers were looking at their phones at a stop sign and they ran into each other in the intersection. Based on the damage to the car, the negligence of both drivers and injuries occurred, the insurance company decided it was a 50/50 split on fault.

But I Don’t Want To Sue Anyone…

Take it from Scott Pecher, who spoke with a friend who didn’t want to pursue action over a crash fatality. He explained to them that filing a claim with insurance was not the same as suing someone over the accident.

“The conversation continued as I explained that filing a claim with an insurance company does not equal a lawsuit.  A lawsuit usually only happens when the insurance company has denied or undervalued a claim, you think they’re wrong, and you choose to file paperwork in Court.  That’s a lawsuit!  A claim, meanwhile, is basically a discussion with and evaluation by an insurance company.”

Even though dealing with an insurance company does not require you to use an attorney, we recommend you at least consult with one so that you can maximize your return.

Remember, you don’t pay us unless you get paid!

Were you in a car accident in Southeast Missouri?

But I don’t want to sue my friend…

Last week, I was having a conversation with a friend about someone…

Insurance Claims: Should You Give a Recorded Statement to the Insurance Company?